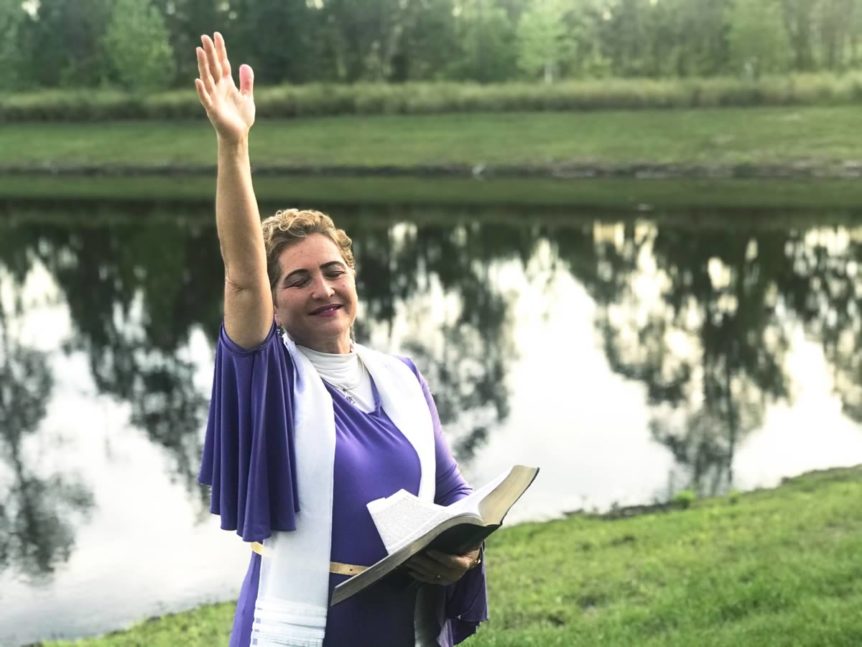 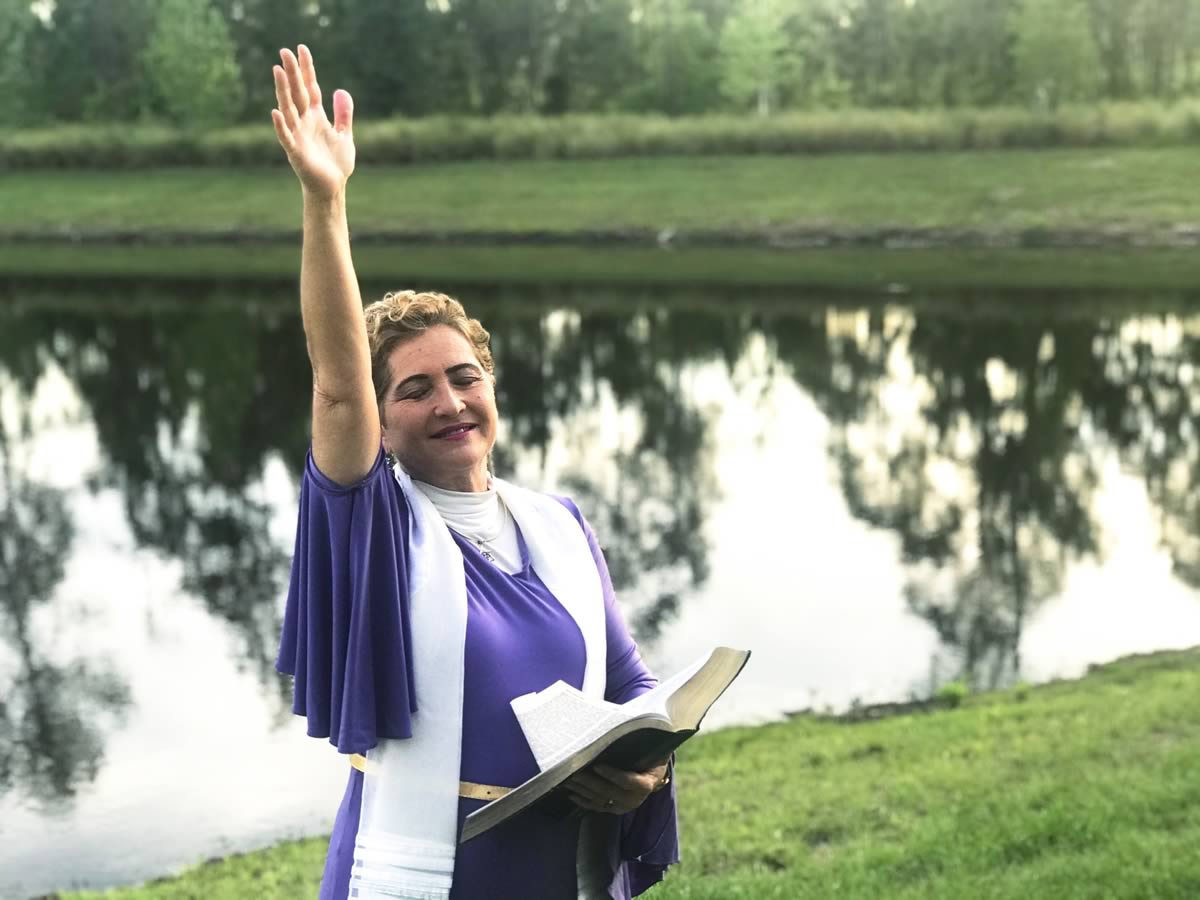 There is no subject more important and urgent in this present day and age than the issue of the Holy Spirit. There are no Bridal preparations that can happen without the Holy Spirit. Unless we have an outpouring of the Pure and Unadulterated Spirit of Prophecy, we cannot and we will not be ready to meet the Master. We cannot and we will not have the Power to bring in and nurture the End Time Harvest – or be able to overcome the tribulation of the coming days.

The COVID-19 pandemic and the fear of the epidemic have been propelling the world into another reality, a new reality. The Creator is judging the world, and multitudes are waking up to acknowledge the fact that we are desperate for answers. Worldly knowledge and wisdom are failing. Human devices are failing, and many are looking for something greater than themselves and their circumstances. Some are finding religion, whether Christianity, Judaism, Islam, or a host of other religions and religious systems. This will be a temporary placebo, a sugar pill that will soon wear off, as it is powerless to save from death and from Yah’s (God’s) judgments.

When Yeshua, the Jewish Messiah, paid the price for our redemption through His Blood Sacrifice, He did it so we will be filled with another Reality: the Presence and Person of the Ruach Hakodesh, the Holy Spirit. We must have the fullness of the Holy Spirit, Who is the Spirit of Prophecy and Who is the Testimony of Yeshua. Nothing else will do. 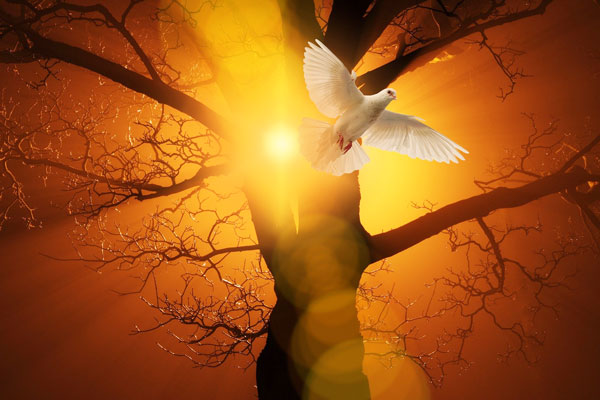 The coronavirus attacks the breath of humans. They die of suffocation. The antidote is not in a human-made vaccine that will have a host of side effects and that, on its own, defiles the Temple of the Holy Spirit with a weakened variation of the same virus. The answer is a Holy Spirit Vaccine.

We then become more like Him, more like Yeshua. We become of the same Spirit that raised Him from the dead. We begin to think and talk like Him – as our world view changes, our walk of faith changes.

After that, you will arrive at the hill of God, where the garrison of the Philistines is. It will come about, as soon as you enter the town, that you will meet a band of prophets coming down from the high place, preceded by a harp, a tambourine, and a flute, and they will be prophesying. 1 Samuel 10:5 TLV 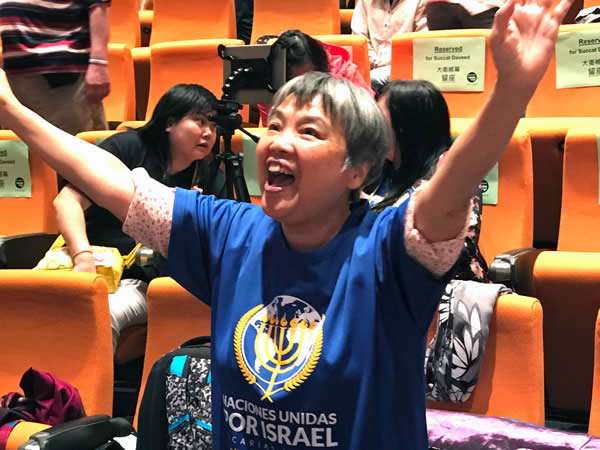 The Spirit of Prophecy flows the best in an atmosphere of worship.

Then the Ruach of Adonai will seize you, and you will prophesy with them—you will turn into another man. Now when these signs happen to you, do for yourself what the occasion requires, for God is with you. 1 Samuel 10:6-7 TLV

Saul was transformed into another man when the Spirit of Prophecy came upon him. He became a Holy Spirit-empowered king. Israel’s divinely appointed and anointed kings were on completely other levels than the Kings of the Nations: they were empowered with the Spirit of Prophecy. Even some of Israel’s Divinely-Inspired legendary Prime Ministers have been empowered by the Spirit of Prophecy. That is what makes them stand out from other government rulers – consider PM David Ben-Gurion, PM Golda Meyer, PM Menachem Begin, and even PM Benjamin Netanyahu.

In fact, the Father of Zionism, Benjamin Zeev Herzl, was also empowered by the Spirit of Prophecy in order to propel the restoration of Israel after 2000 years of exile. When he wrote his defining book Old New Land (about the return of the Jews to their Ancient, Biblical Land, the Land of Israel), he was under the influence of the Spirit of Prophecy. He said that he wrote “under compulsion” as if someone stronger than himself was writing through him. That’s the Spirit of Prophecy. It takes us higher, and it empowers us to do things that normal humans can’t do. 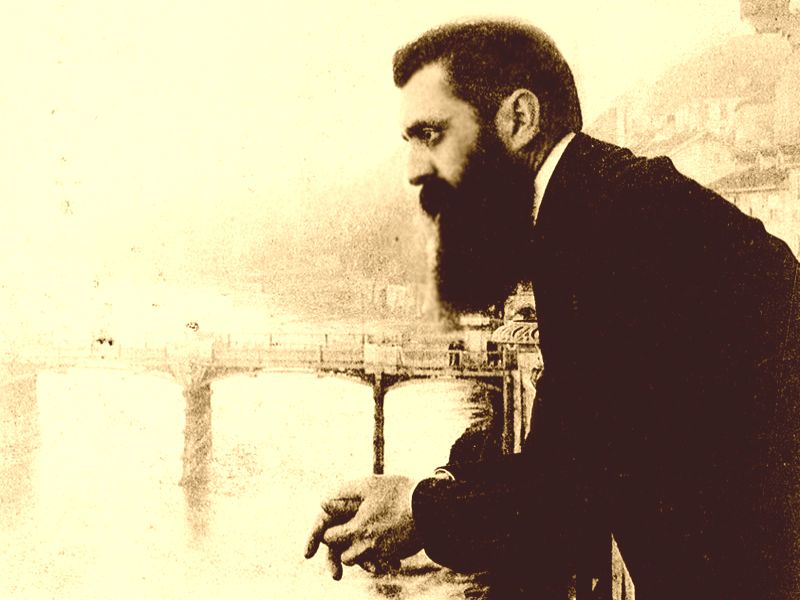 When Yeshua rose from the dead, He admonished His disciples to do NOTHING until they had received the Holy Spirit. And when they did (during the Biblical Feast of Shavuot), the Spirit of Prophecy manifested through these Jewish disciples. The outcome of this was a supernatural harvest of souls: thousands of Israelis were saved that day!

Suddenly there came from heaven a sound like a mighty rushing wind, and it filled the whole house where they were sitting. And tongues like fire spreading out appeared to them and settled on each one of them. They were all filled with the Ruach ha-Kodesh and began to speak in other tongues as the Ruach enabled them to speak out. Acts 2:2-4 TLV

Later, when Paul passed through Ephesus, he found disciples that had not been filled with the Ruach Hakodesh, the Holy Spirit. He proceeded to rectify the matter. Believing in the Messiah is not enough; we must be empowered with the Spirit of Prophecy.

And when Paul laid hands upon them, the Ruach ha-Kodesh came upon them, and they began speaking in tongues and prophesying. Acts 19:6 TLV

When Elohim wanted to multiply leadership in Israel, so that Moses would not carry the load alone, He poured out the Spirit of Prophecy on 70 more elders:

Adonai descended in the cloud and spoke with him. He took some of the Ruach that was on him and placed it on each of the 70 elders. It so happened that when the Ruach first rested on them, they prophesied—but never again. Two men, however, had remained in the camp. The name of one was Eldad, and the name of the other was Medad. The Ruach rested on them. They were among those listed, but they had not gone out to the Tent. So they prophesied in the camp. Numbers 11:25-26 TLV

There is a difference when the Spirit of Prophecy is upon someone or inside of someone. We must have the Holy Spirit inside of us, and this happens when we surrender fully to Messiah and are born of the Spirit. But we also need to have Him upon us.

But you will receive power when the Ruach ha-Kodesh has come upon you, and you will be My witnesses in Jerusalem, and through all Judah, and Samaria, and to the end of the earth.”
Acts 1:8 TLV

The Spirit was upon King David, who was both a Mighty Warrior and a Psalmist worshipper. He fought UNDER the Spirit of Prophecy, and He composed Psalms and worshipped under the Spirit of Prophecy. His battle strategies were Prophetic and so were his songs. That is the reason why, after committing adultery with Bathsheba and murdering her husband, he cried out the following:

Create in me a clean heart, O God, and renew a steadfast spirit within me. Do not cast me from Your presence— take not Your Ruach ha-Kodesh from me. Psalms 51:12-13 TLV 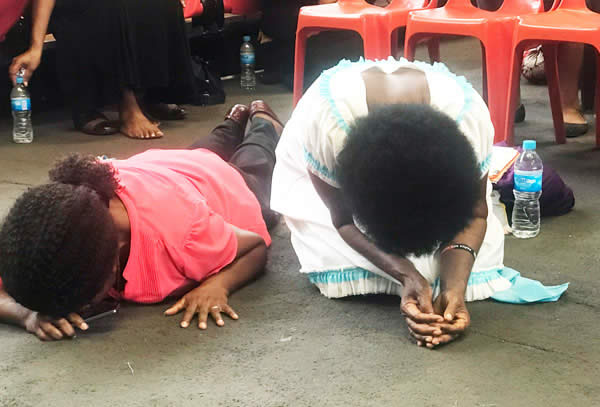 Take not Your Holy Spirit from me

His predecessor, King Saul, had lost the Holy Spirit that had initially empowered him. The Ruach retreated from him because of his disobedience, fear of man, cowardice, and jealousy. He failed to destroy all the Amalekites and he coveted the plunder. He then became jealous of David, who was fast becoming the Rising Star of Israel. Compromising the Call of God in our lives will always cause us to lose His Spirit – and another spirit will come instead.

The Spirit of Prophecy retreats when there is disobedience, false motivation, selfish ambition, jealousy, covetousness, and compromise.

Now the Ruach Adonai had departed from Saul, and an evil spirit from Adonai terrified him. 1 Samuel 16:14 TLV

This generation of Christian and Messianic believers sorely lacks the Spirit of Prophecy. Just like in the case of King Saul, the Divine Call has been compromised. He needed to destroy all the Amalekites that hated Israel, including their livestock, but he kept the choicest animals alive together with Agag, their king. This disobedience cost King Saul the Crown. He disobeyed and compromised, then lost the Spirit, lost the Divine Power, lost the Crown.

Samuel said: “Does Adonai delight in burnt offerings and sacrifices as in obeying the voice of Adonai? Behold, to obey is better than sacrifice, to pay heed than the fat of rams. For rebellion is like the sin of divination, and stubbornness is like iniquity and idolatry. Since you have rejected Adonai ’s word, He has also rejected you as king.” 1 Samuel 15:22-23 TLV

So it is with this generation of believers. For more than 25 years, YHVH has been calling the Church to come out of Replacement Theology, Romanized Christianity, pagan mixture in the feasts, and all anti-Semitism, including anti-Zionism.

This has been happening since 1994 when I published my first book on the subject called The Healing Power of the Roots, where I gave this Prophetic Call to the Church. This Call was given under the Spirit of Prophecy!

For many years He has been knocking on our doors, desiring to restore His identity as a Jewish Messiah, with His Covenant name Yeshua, as the Father called Him. But Christian and many Messianic anointed leaders, just like King Saul, have failed to eradicate Replacement Theology because of the Fear of Man. Therefore, there has been a loss of authority – and sadly the Spirit of Prophecy has retreated.

The only way back is Teshuva: Repentance for compromising the Truth because of the fear of man, selfish ambition, jealousy, and for being lukewarm. This repentance from all aspects of the Identity Theft of the Messiah is urgent, for we have embraced a Roman Christ instead of a Jewish Messiah. Then the Spirit of Prophecy will return, along with the Testimony of Yeshua, with the most astounding signs, wonders, and miracles the world has ever seen!

The Awakening and the Revival of the Third Day is at the Gate. Remember, one day is like one thousand years to YHVH. We are on the Third Day, the Third Millennium, since Yeshua came.

After two days He will revive us. On the third day He will raise us up, and we will live in His presence. So, let us know, let us strive to know Adonai. Like dawn, His going forth is certain. He will come to us like the rain, like the latter rain watering the earth. Hosea 6:2-3 TLV

This fresh, new outpouring of the Spirit of Prophecy will allow His Bride to arise – comprised of the One New Man of Jews and Gentiles grafted into the same Olive Tree – ready for the Wedding with the Jewish Passover Lamb, Yeshua.

Then I heard something like the voice of a great multitude—like the roar of rushing waters or like the rumbling of powerful thunder—saying, “HalelluYah! For Adonai Elohei-Tzva’ot reigns! Let us rejoice and be glad and give the glory to Him! For the wedding of the Lamb has come, and His bride has made herself ready, The Revelation 19:6-7 TLV

We sincerely repent and entreat Abba to restore the Spirit of Prophecy to His Bride. 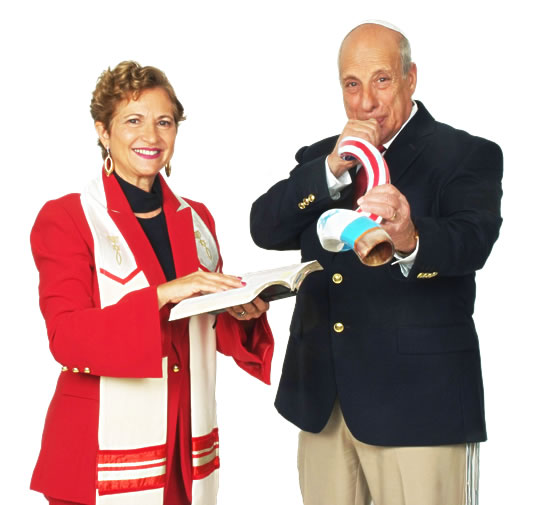 Join Archbishop Dominiquae Bierman from the Jewish Quarter of Jerusalem (Yerushalayim) as she continues this fascinating, comprehensive teaching – a Zionistic movement in the late 19th century sets the stage for the formation of the State of Israel in 1948. Hear more history (His-story) about “the most important piece of real estate on earth” – the Temple Mount.

Anti-Semitism is worse than the Coronavirus

See our Global Re-education Initiative (GRI) against Anti-Semitism in the Church – help us pull it through with your generosity. See Against-antisemitism.org

Book of the Week: The Healing Power of the Roots

It’s a Matter of Life or Death!