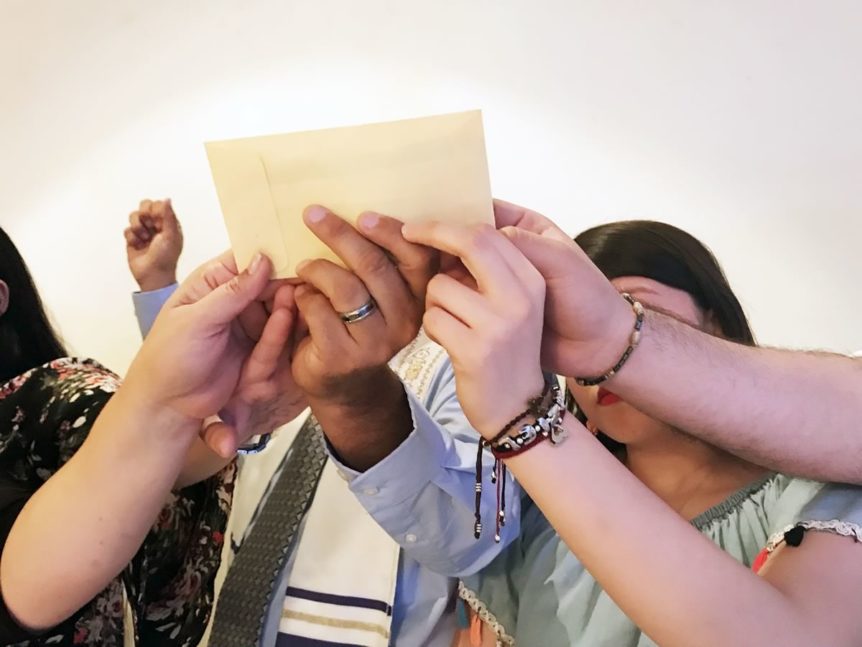 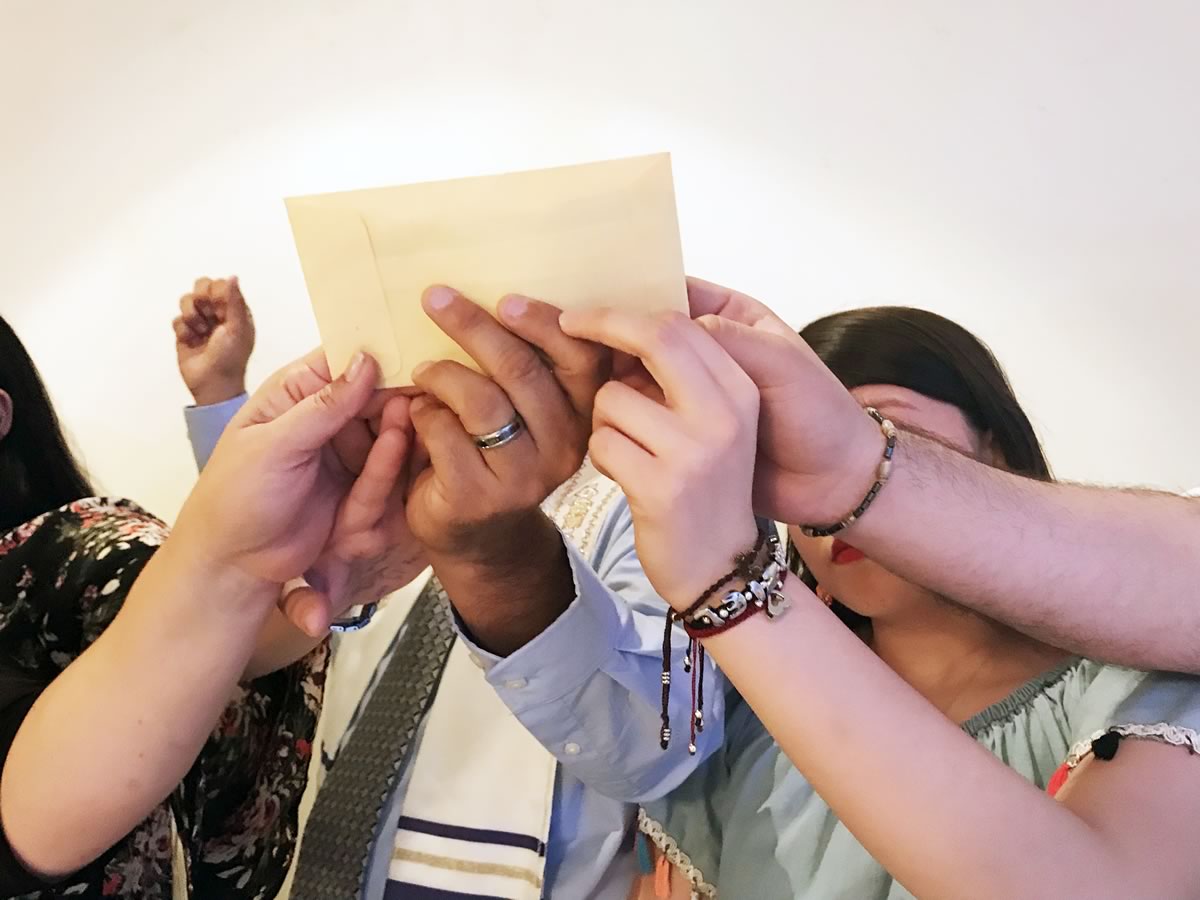 May my testimony of His goodness and faithfulness to His holy Word be a blessing to all.

It begins when suddenly I realized that restoring Israel’s honor was as urgent as it was necessary for the healing of my city, my nation, my life, and my family. I realized that it was no longer time to remain bankrupt spiritually, physically, financially, and emotionally, because it all leads to the same thing: emptiness and destruction.

This process to restore honor all begins with the wonderful teachings we have received from the ministry of the Apostle Dominique Bierman, who through the revelation of the powerful Key of Abraham (which opens the doors), sowed within my heart that seed which was now bearing fruit in and around my life.

A day came when the Ruach (Spirit of Elohim) gave me a dream. In the dream, I saw that I had left my vehicle at the main entrance of the city of Rio Bravo (where I live), and along that avenue came a river of blood (because of deaths caused by the drug trade). I saw the river was almost reaching us. I quickly went out to my vehicle because I knew that inside it was the offering that the church had given to be sent to Israel – and I knew that this offering was bringing restitution – the only thing that would cause the decrease of that river of blood and also the disappearance of it. So I tried to open the truck and quickly check that these offerings were there. The Ruach HaKodesh was also telling me that this was truly what would stop this river of blood. Thanks be to the Lord – they were there!

It is well known to many that in northern Mexico, there is a constant war between drug cartels and between the armed forces. There is a continual danger of finding yourself in the middle of a firearms confrontation. That is why the Ruach told me through this dream that honor must be restored to Israel through offerings, along with prayer and humbling ourselves for the contempt that has been made of Israel by the nations of the earth. This strategy brings freedom from death and the river of blood. This will make a difference because the powerful Key of Abraham is put into action, the key to answered prayers and mercy poured out instead of anger.

Just about the time I dreamed this, we began to pray for Israel, to speak for Israel and to bless Israel with true actions. Then we began to see our prayers of protection for our city answered, and an atmosphere of peace began to be felt. The criminal activity of the cartels was greatly diminished. 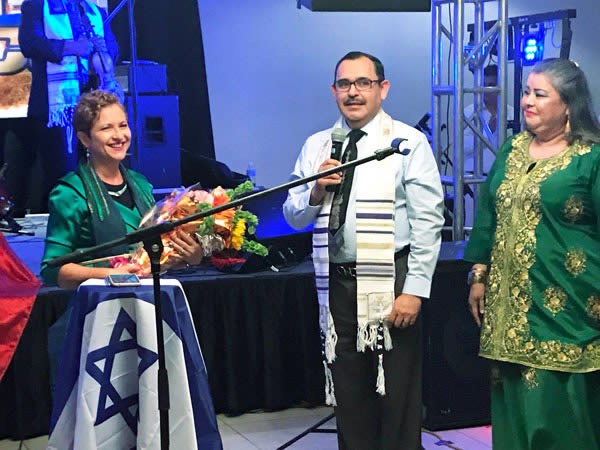 Restore Honor – It’s a Commandment of the Torah!

Then the Lord spoke to Moses, saying, “When a person sins and acts unfaithfully against the Lord, and deceives his companion in regard to a deposit or a security entrusted to him, or through robbery, or if he has extorted from his companion, or has found what was lost and lied about it and sworn falsely, so that he sins in regard to any one of the things a man may do; then it shall be, when he sins and becomes guilty, that he shall restore what he took by robbery or what he got by extortion, or the deposit which was entrusted to him or the lost thing which he found, or anything about which he swore falsely; he shall make restitution for it in full and add to it one-fifth more. He shall give it to the one to whom it belongs on the day he presents his guilt offering. Then he shall bring to the priest his guilt offering to the Lord, a ram without defect from the flock, according to your valuation, for a guilt offering, and the priest shall make atonement for him before the Lord, and he will be forgiven for any one of the things which he may have done to incur guilt.”

Just as we desire to be made whole when someone offends us, or steals from us, or slanders us, so we the nations of the world need to realize how we are indebted to the blessed people of Israel. The promise of Genesis 12:3 still stands – “I will bless those who bless you and curse those who curse you”. 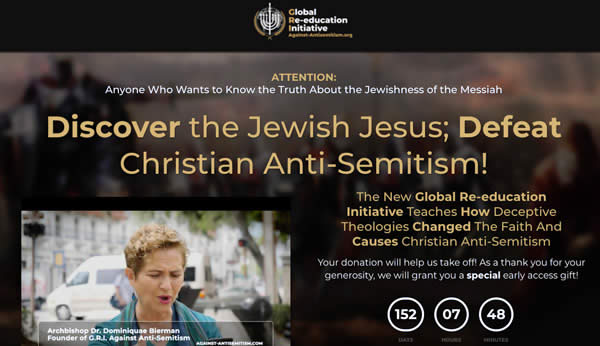 The Global Re-Education Initiative (GRI), led by Archbishop Dominiquae Bierman, is not only necessary but urgent! For the sick who will die shall be numbered in the millions amidst plagues that will scourge the earth without end, unless the Lord finds someone who fully understands what it is to restore honor to Israel. Restoring is more than asking for forgiveness! Genuinely asking for forgiveness is the first thing we must do when we know we have done a wrong, but to restore thehonor to someone, we must do more than just apologize.

In history, we find that when a man was questioned about his honor, an appointment was made to settle the dispute, and they said: “I challenge in a duel the knight who has questioned my honor.” So it was known that whoever came to defend his honor, even with his own life, was saying that his honor was above all slander against him.

We, the nations of the world, have committed a great dishonor by using slanderous and lying words against Israel, staining her honor. So, it is time to repent, ask for forgiveness, and restore His honor.

In Leviticus 6:5, when an offering was made for the guilt of slander, the person acknowledged the damage, and asked for forgiveness with his atonement offering to the Lord. But now it was time to restore, and it says here these words:

…he shall make restitution for it in full and add to it one fifth more; he shall give it to the one who belongs to him on the day he presents his guilt offering.

In Leviticus 6:6, he adds that the offering should be given to the priest.

Then he shall bring to the priest his guilt offering to the Lord. (NASB) 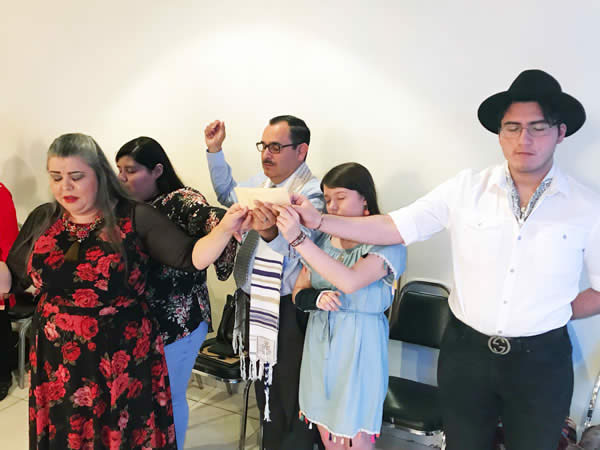 In addition to repenting, making restitution for the damage, and adding the fifth part (equivalent to 20%), it was necessary to give it to the Priest, which means that we must present it to the one who can pray for us for the mercy of the Eternal.

Sometimes we rise against the only person who will hear, and do you know who has the doors open to ask Adonai to have mercy on us? Yes, the answer is the Jewish people of today. They are His chosen ones, the light of the Nations – they are our priests who will open the way for Adonai to forgive us and for the refreshment of His presence to come. (Acts 3:19)

The Hebrew words Shuv and Shalem clarify the concept of ¨Restitution¨.

The word ¨will restitute¨ (in Leviticus 6:4) is the Hebrew word SHUV, from which we derive the word Teshuvah – meaning turn or return, or repentance for a great restoration.

And the word “restore” in Leviticus 6:5 is the word Shalam, whose meaning here is to make payments and from the word Leshalem which means to make A PAYMENT. So, to make peace, you need to make a payment of restitution.

Yeshua mentioned this in Matthew 5, verses 21 through 26:

“You have heard that the ancients were told, ‘You shall not commit murder’ and ‘Whoever commits murder shall be liable to the court.’ But I say to you that everyone who is angry with his brother shall be guilty before the court; and whoever says to his brother, ‘You good-for-nothing,’ shall be guilty before the supreme court; and whoever says, ‘You fool,’ shall be guilty enough to go into the fiery hell. Therefore if you are presenting your offering at the altar, and there remember that your brother has something against you, 24 leave your offering there before the altar and go; first be reconciled to your brother, and then come and present your offering. Make friends quickly with your opponent at law while you are with him on the way, so that your opponent may not hand you over to the judge, and the judge to the officer, and you be thrown into prison. Truly I say to you, you will not come out of there until you have paid up the last cent.

All of this Scripture speaks of the Power of Restitution, but let us go a little deeper into the way anti-Judaism works. It has been because of anti-Semitism that there have been “Deaths and Hatred,” against the Jewish people. Much of this is “under the mask of Christianity”, which claims to give offerings to Yah, and which claims to gather every Sunday to give offerings to Yah. But my question is this: will the Eternal YHVH of Israel look with favor upon those offerings, which with one hand are offered to Him and, with the other hand, have a knife of hate, anger, and even a death wish against the people of Israel? The answer is clear: He is not receiving those offerings! So Yeshua’s advice is to go and reconcile with your brother Judah first, and make peace – in other words, restore and make peace. 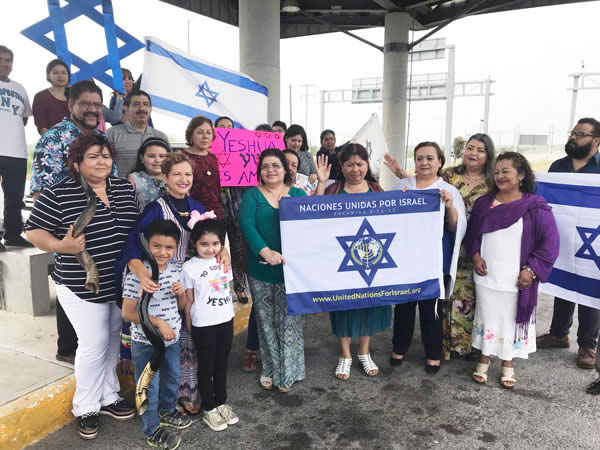 This is all about restoring honor to Israel!

In every kingdom, it is known that the King’s son is the Crown Prince – he will one day become King. It is true in any of the kingdoms we still know, and it is very interesting that YHVH is the King, and that he called one of Abraham’s descendants, “My first-born” (in Exodus 4:22). The one known as My prince was initially called Jacob, but Adonai decided that his name would be known as Israel, the meaning of which is ¨Prince from Elohim¨. What a difference – what a vast difference! But what a profound difference in how the nations of the world speak to Israel – they say it is just one more nation on earth, like any of our nations. In the eyes of the Living Elohim, however, they are not just any nation – it is “His prince.”

The nations of the world are indebted to the people of Israel, for they gave us the Torah, the covenants, the promises, the revelation of the Living Elohim, and gave us Yeshua HaMashiach.

Today we must turn entirely to HIM: loving His Torah, loving Yeshua, and restoring honor to Israel, their Prince. I am a witness of His goodness, for surely the Lord means what He says:

I will bless those who bless you, and the one who curses you, I will curse. Genesis 12:3

National Delegate of the United Nations for Israel (UNIFY) 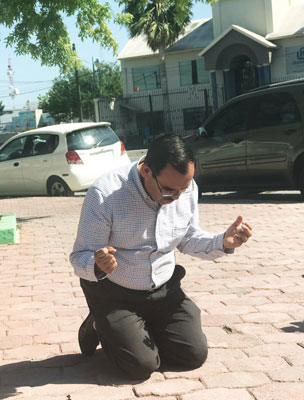 Watch: Second Knesset of the Nations

Learn more about the United Nations for Israel (UNIFY) as Delegates elected to represent their nations for a two-year term were installed in Jerusalem during Sukkot 2019. Join with Archbishop Dominiquae Bierman as she explains how these Delegates’ efforts will continue to assure Zechariah 2:11,12 is prophetically fulfilled by UNIFY- as we all join together from the nations to see Israel’s full restoration.

Book of the Week: Restoration of the Holy Giving