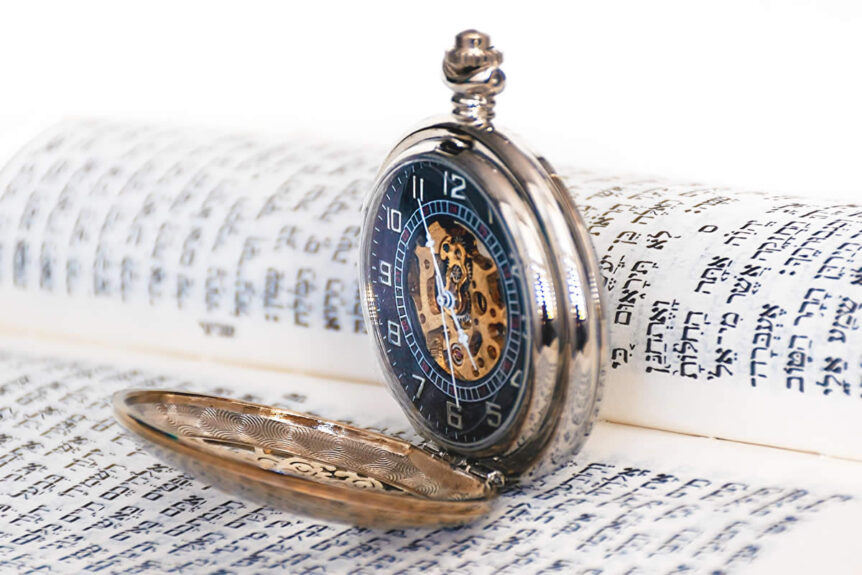 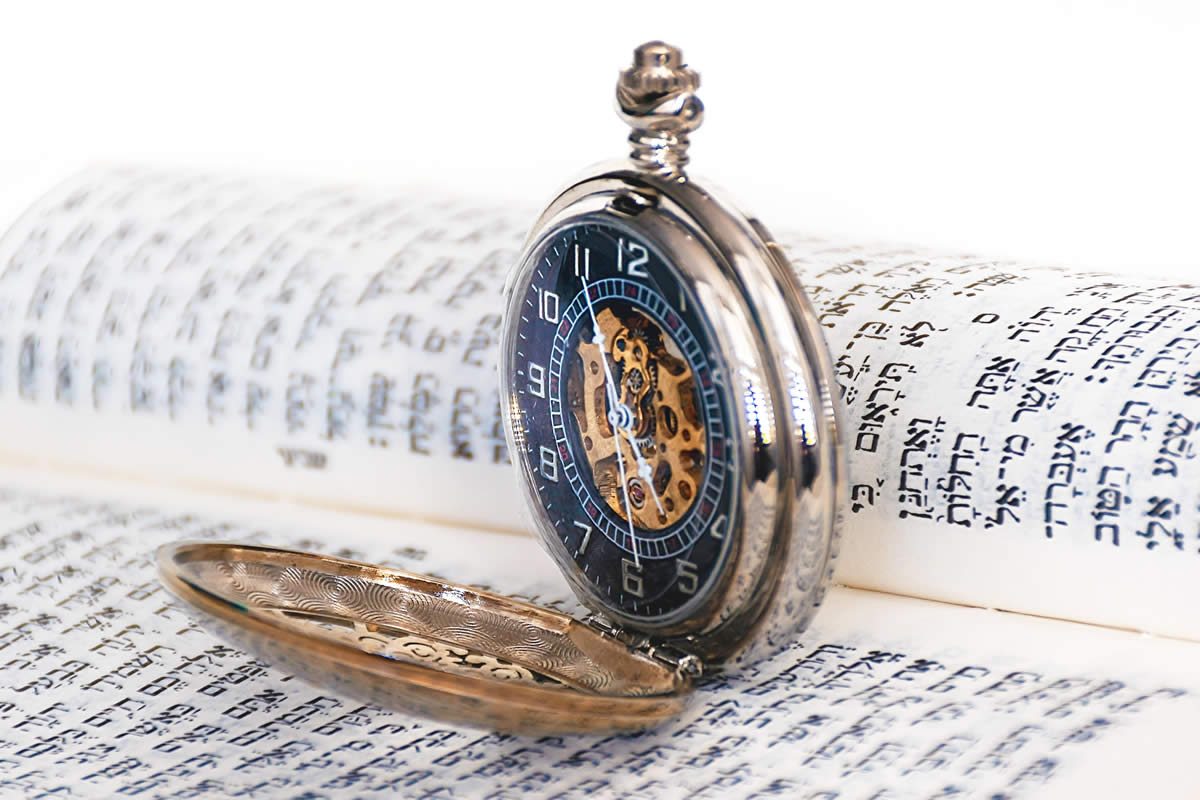 For then I will restore to the peoples a pure language, that they all may call on the name of YHVH, to serve Him with one accord. Zephaniah 3:9

I woke up this morning on the third day of my monthly retreat of rest and prayer, and I heard Abba expressing His desire for the restoration of a pure language with emphasis on the Biblical way of naming the days of the week.

I would not have tackled this subject lest I would have heard directly from Him as the whole world is using pagan names and names of foreign gods and idols to call on the days of the week, and they do not know it. It is not very convenient to tackle this subject as it starts to separate or sanctify those who are His Bride, Pure and Holy, without spot or wrinkle! This is not a “religious issue,” nor is it done under a “religious spirit.” Rather, it is a prophetic call of End Time Restoration.

Repent therefore and be converted, that your sins may be blotted out, so that times of refreshing may come from the presence of YHVH, and that He may send Yeshua the Messiah, who was preached to you before, whom heaven must receive until the times of restoration of all things, which God has spoken by the mouth of all His holy prophets since the world began. Acts 3:19-21

He is in the “business” of restoring all things so that Yeshua, the Jewish Messiah, can return. One of these things is the restoration of purity to our lips – A Pure Language.

Death and life are in the power of the tongue, and those who love it will eat its fruit. Proverbs 18:21

It is not comfortable to enter into His restoration move; it really “kills the flesh” as it is not convenient or popular. I would have been the first one to dismiss it as secondary in importance unless I had not heard from Him that it was time.

Yeshua is The Name 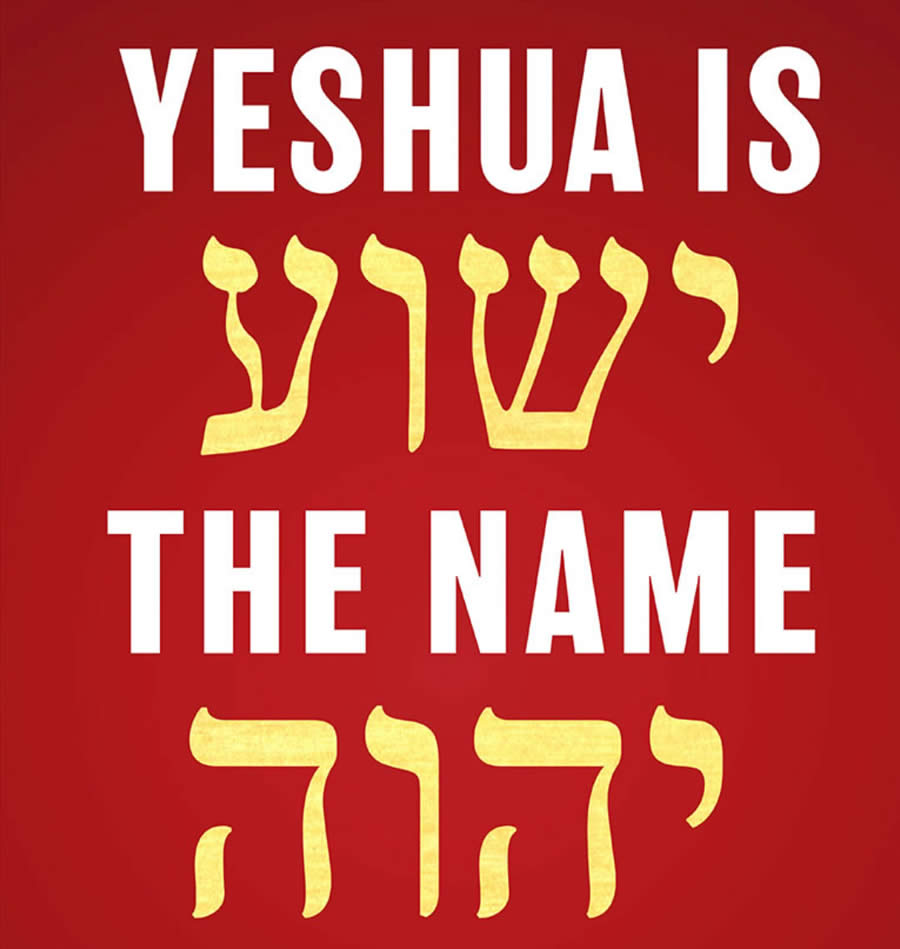 I suggest you all get it from our shop, read it and pass it on! (Available as hard copy and Ebook here)

I have been persecuted about the importance of calling Him by His Birth Name and not by the transliterated Greek Jesus Christ that has been used to curse and murder millions of Jews and others. But I have had to endure the pressure because He wants His Name back. So, if you have a problem with me about this, go to Him and complain. He said to me, “My Bride will love My name!” which means those that are not His Bride will oppose the Name and the Jewish Identity of the Messiah. It makes it easier to hate Jews that way and still stay Christian. You cannot call Him Yeshua and hate Israel. And only to His Name as given by The Father, every knee shall bow, and every tongue confess that He is Adonai. Do you realize that most of the world has not bowed down their knees? They are waiting for His Name, Yeshua, and the Gospel made in Zion! Western Christianity has not gotten them saved, Enlightening.

Many preachers know this to be true but compromise because of the Fear of Man and “convenience.” That is a snare I do not want to be entangled with. So here it is, one more step into the restoration of all things, the Restoration of Pure Lips and the restoration of the names of the Days of the Week. 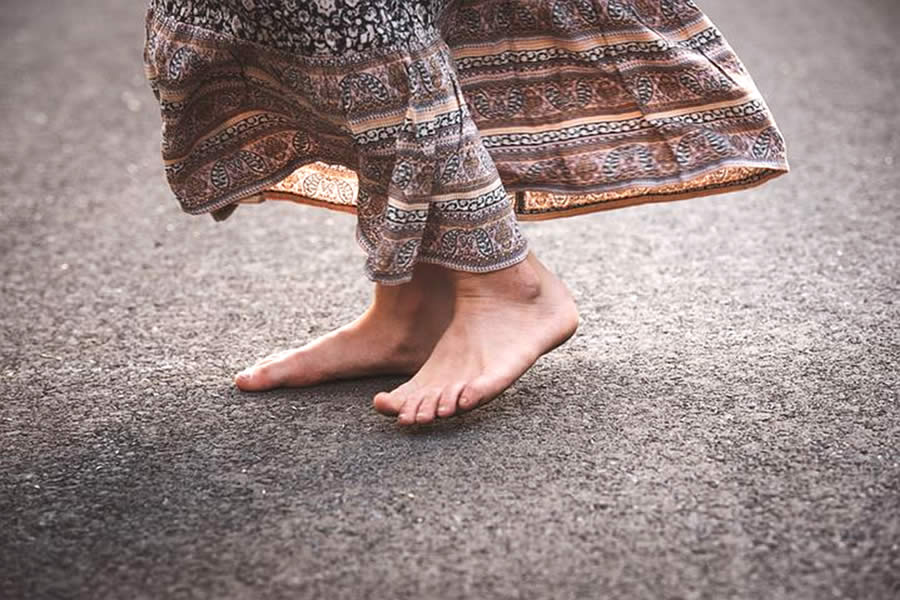 The Hebrew Holy Scriptures calls the days of the week as follows:

Elohim called the light Day, and the darkness He called Night. So the evening and the morning were the first day. Genesis 1:5

We see this terminology for the days of the week all the way from Bereshit (Genesis) One, all the way from Creation. Restoring their names is a creational issue. It is like restoring the blueprint of the Creator Himself versus all other gods that are non-creators. It is very revealing that the names that most of the world (besides Israel) call the days of the week are all derived from pagan gods. This restoration is important if we are to worship the Creator-Elohim, The God of Israel, above all other gods. But how can we, if on our lips are the names of other gods, every day of the week and many times a day?

“See you on Sunday” sounds like an innocent phrase, but it is a pagan worship phrase. Even though we do not mean it, this is still the True Meaning of the words: “See you on Sunday” means “see you on the Day the sun god is worshiped.” The name Sunday was given to the first day of the week, Yom Rishon, because that was the day the pagans dedicated to Jupiter-Zeus or, in other words, the sun god.

But you are a chosen generation, a royal priesthood, a holy nation, His own special people, that you may proclaim the praises of Him who called you out of darkness into His marvelous light; 1 Peter 2:9 NKJV

Another supposedly innocent phrase is “But everybody does it.” That is the case with the names we call the days of the week. But are we, as followers of King Yeshua, supposed to do things the way that everybody does, even if it glorifies pagan gods and their names? Or are we to be Different? Another supposedly “innocent” objection is the following: “But we are going to sound weird to the rest of the world and will not be able to “evangelize” them.” First, let me tell you that we are called to be special, which means different and uncommon, so the sooner we get used to the fact that we are different, the better and the more freedom you will have in your worship and witness. Second, the Great Commission that was entrusted to the Jewish Disciples about 2000 years ago was not about “evangelizing” but about making disciples of all nations.

Go therefore and make disciples of all the nations. Matthew 28:19

All nations mean all cultures. Teaching all nations to name the days of the week is a foundational issue that will help them stop calling on the names of foreign gods and teach and disciple them to honor the Creator, HalleluYah. We are supposed to teach them what they do not know, and they do not know how to worship the Creator. We must teach the nations that He is Holy, Kadosh, and Separate from all their other gods.

We are to empathize with humanity but avoid becoming like them and sinning like them. That is what we were, but now we have been transported to another kingdom that has a different set of rules. So even as we seek to “become all things to all men,” as the Jewish Apostle Paul said, that does not mean taking on pagan traditions, pagan names, pagan eating, and the like. This only means we must look for a way to speak to all in a manner they can understand. In every culture, there is something that points to The Creator, and such was the case of the altar to an unknown god in Athens. Paul used that to reach them. We can find this in every culture in one way or another.

So Paul stood in the midst of the Areopagus and said, “Men of Athens, I observe that you are very religious in all respects. For while I was passing through and examining the objects of your worship, I also found an altar with this inscription, ‘TO AN UNKNOWN GOD.’ Therefore what you worship in ignorance, this I proclaim to you. The God who made the world and all things in it, since He is Lord of heaven and earth, does not dwell in temples made with hands; Acts 17:22-24

Notice how Paul connected with their terminology “Unknown God” and led them to The Creator, making a clear distinction between pagan worship and Holy Worship. This is how we can use the days of the week wherever they are called with pagan names. We can take the people to Elohim-The Creator who made Heaven and Earth and named the days of the week by their number, except the Seventh, which is the only Day that has a name, Shabbat, because it is the divinely and forever appointed day of rest. There is a distinction.

YHVH marked the Seventh Day with the name Shabbat, but He did not mark any other day with a name but only with numbers. Because the Shabbat is His Holy Day Forever and a sign that He is The God of Israel, The Creator, all who love The Creator would worship Him on that day and not replace it with the First day of the Week, calling it Sunday or the day when the sun-god is worshiped.

The following is (by the most part) taken from a study done by https://www.crowl.org/Lawrence/time/days.html. I saw that their sources were compatible with what is written in many history books and dictionaries; therefore, I decided to use it. 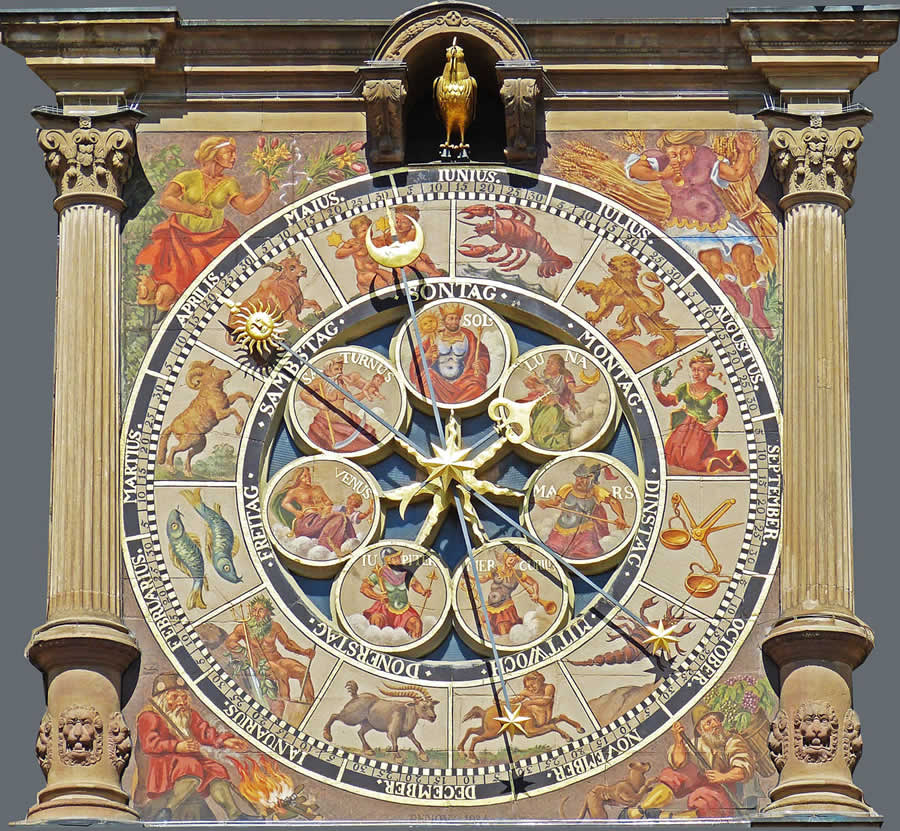 The Naming of the Days

And that you do not inquire after their gods, saying, ‘How do these nations serve their gods, that I also may do likewise? Deuteronomy 12:30b

The Greeks named the days week after the sun, the moon, and the five known planets, which were, in turn, named after the gods Ares, Hermes, Zeus, Aphrodite, and Cronus. The Greeks called the days of the week the Theon hemerai, “days of the Gods.” The Romans substituted their equivalent gods for the Greek gods, Mars, Mercury, Jove (Jupiter), Venus, and Saturn. (The two pantheons are very similar.) The Germanic peoples generally substituted roughly similar gods for the Roman gods, Tiu (Twia), Woden, Thor, Freya (Fria), but did not substitute Saturn.

Tiu (Twia) is the English/Germanic god of war and the sky. He is identified with the Norse god Tyr. Mars is the Roman god of war. Ares is the Greek god of war.

Woden is the chief Anglo-Saxon/Teutonic god. Woden is the leader of the Wild Hunt. Woden is from wod “violently insane” + –en “headship”. He is identified with the Norse Odin. Mercury is the Roman god of commerce, travel, thievery, eloquence and science. He is the messenger of the other god. Hermes is the Greek god of commerce, invention, cunning, and theft. He is the messenger and herald of the other gods. He serves as patron of travelers and rogues, and as the conductor of the dead to Hades.

Thor is the Norse god of thunder. He is represented as riding a chariot drawn by goats and wielding the hammer Miölnir. He is the defender of the Aesir, destined to kill and be killed by the Midgard Serpent. Jupiter (Jove) is the supreme Roman god and patron of the Roman state. He is noted for creating thunder and lightning. Zeus is Greek god of the heavens and the supreme Greek god.

Saturn is the Roman and Italic god of agriculture and the consort of Ops. He is believed to have ruled the earth during an age of happiness and virtue. Cronus (Kronos, Cronos) is the Greek god (Titan) who ruled the universe until dethroned by his son Zeus.

The Wrong Order of The Week

We encourage you to restore a Pure Language and stop naming days after other gods, even if it is uncomfortable. Every big change starts with a small step. Start to call the days of the week by their numbers as written in Genesis One (Read the chapter) and all over the Bible. And the Seventh Day, The Holy Day of Rest, we call Shabbat. Separate the Shabbat as the Day of Rest and start your week on Yom Rishon, The First Day!

Shabbat shalom and have a Blessed Week! 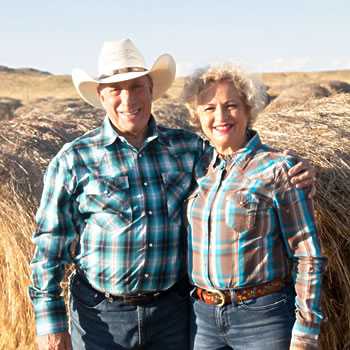